I recall – aided by a picture I have somewhere in a shoebox – of building a skyscraper out of wood blocks higher than me with my dad when I was somewhere in the range of age of my daughters.  With blocks, there was an equal pleasure in the building and the smashing of the structure to bits when you’re done.  The challenge was against nature: how much could you push before the inevitable small instabilities opened the door for gravity to take you down?  I can remember “forts” made out of chairs, and other massive structures.  I enjoyed playing with LEGOs, but don’t remember anything I built.  They were more beautiful, little gems; not a contest against nature.  About as transient as blocks, without the boyish satisfaction of being Shiva, the destroyer.

As LEGO started to develop first themed, then branded sets, this didn’t fill the gap with me.  The intricacies of putting things together and serendipity of matching blocks in unexpected ways seemed self-defeating.  The licensed stuff often goes too far.  You didn’t get to use your imagination very well: it just seemed like a grind to re-create something out of Star Wars in LEGO (though my cousins once removed who I’m probably similarly wired as, love doing this.)  I might have just missed the optimal window for LEGOs: I wonder this when at the Google cafeterias whose tables (often?) have them.

But that changed for me this weekend with LEGO Architecture: a series of block sets that enables you to emulate great buildings around the (mostly contemporary) world.  I hadn’t seen these before wandering into the Barnes & Noble toy section last week.  (This is a little odd; purchasing lots of LEGO gifts for said cousins I just didn’t run into this – even at places like LEGO stores in New York and Disneyland but maybe my eyes weren’t tuned for them.)

I was with all three girls and they clamored for virtually all of the sets B&N had.  Frank Lloyd Wright’s works are very well-represented among the sets.  The girls pushed for the Robie House, whose red colors were perhaps the most immediately visually enticing.  But the 2,000+ piece count and much higher price shooed me down to the Imperial Hotel.  I’ll go out on a limb and say this might have would up being the harder choice: the sheer number of LEGOs is only 1100 or so but the microscopic size of many pieces and intricate weaving is probably more demanding than the soothing larger bricks that look to be a part of Robie.

The younger two girls tore into set and with a couple bags of bricks, commingled pieces with our regular LEGO table.  This is understandable, but a possible apocalypse as far as finishing the designated object is concerned.  I felt guilty mildly even gently chiding them for doing this – and my oldest would later also appropriate pieces off the dining room table to make her own “landing craft”:

There was a creature made of cotton swabs inside and Amelia explained the open hole as a way the soldier could look out of it.  It was very much a D-Day landing craft and I felt bad having to pick this apart.  She was more indifferent than I was conflicted.  But it goes to the conflict when you get a specialized set.  Why not just let the kids go nuts?  I don’t have a really good answer to that question.  A good answer is that by following the sometimes tortured discipline of a master’s instructions you are (very likely) building something greater.  Completing such a thing is itself, in turn, inspirational and creative.

I think more importantly, by painstakingly – and only roughly – following the build of an epic building you pay closer attention to architecture.  This is akin, at a structural level, to Paul Johnson’s instruction in his Art survey history that drawing forces you to look at detail.  Your eye can’t just glance over a building and say “wow, that’s cool.”  You have to understand what makes it cool.

Still it’s a bit of conflict.  Building the 1100 piece project over two days with mostly a four and five year old hanging around the table there was a whole lot of (unnecessary?) anxiety over whether another piece would be lost to the wayward movement of some arm, some cat, some side project of yet-unused pieces.  (Gigi made several “Incredipede” creatures: which remains very popular in our house despite only letting her play twice so far.)

Amelia was very busy with the birthday parties of two of her best friends and other scheduled activities this weekend, and wasn’t around for much of the building.  A few passages through was not particularly interested in the early stages, but requested to be around “at the end” before going to Erica’s second concert this weekend.  Caroline and Genevieve were both persistently excited.  Both in finding pieces among the slew of unused ones, a little bit of figuring out where they should go, but also simply at watching the building come to life.  Their instincts carried them to add “an elevator” with LEGO pieces from the outside and have ongoing small narratives of a minifig’s life in around the hotel.  The box understandably cautions the product is for older kids but younger ones are going to get a kick out of it.

It was a two-day, off-and-on project.  Perhaps seven or eight hours total.  It could be done faster if you’re not also coaching your kids’ spatial recognition through LEGO when they want to help.  You’re going to get increased (if trivial?) precision in your computational discipline: where, exactly should this block go, and go no where else?  There is an unusually large number of 1×1 objects in this set to string together which for at least my old or impatient fingers brought on maybe more pinches than necessary.  But the reward of slow progress and breaking the large project into around 100 of easily understandable pages smoothed the progress nicely.  I enjoyed the time immensely; with either jazz or Caroline’s choice of Disney music in the background, time flew.  The finished product isn’t going to meet the fate of my childhood block creations but probably live in new bookshelves we put in this week:

There was only a loss of one major piece – a beam for the center roof in the back.  I adapted for this by adding some emoluments and slightly rearranging what are supposed to be a single smooth line of clean grey pieces.  There were other remaining bits that I must have missed elsewhere or been the beneficiary of a small supply-chain hiccup.  (A few showed up in the front row of single 1×1 bits.)  My speed was definitely picking up over time.  There was also an alarming development towards the end when I thought the compression of the back rows might have necessitated more adaptation but pushing pieces around got everybody in order.

Water Isaacson’s biography of Steve Jobs talked about how Apple engineers had to make the internals of the Apple II to be clean and steamlined as well: even if they customers would never see it.  The engineers would know.  The Imperial Hotel gave me a glimpse into that.  There were elaborate color choices and structures inside that slowly disappear as the skin of the building matures.  I still feel like I may have misplaced two structures.

The Imperial Hotel no longer stands in the form Wright built it.  One history is in this slideshare presentation.   The centerpiece, represented in the LEGO set, was moved in 1968 out of the city to effectively a museum.  Long wings not represented here didn’t make the move.  The replacement with a hideous cement tower has to rank alongside the destruction of Penn Station for Madison Square Garden around the same time for top mid-century architectural travesty. 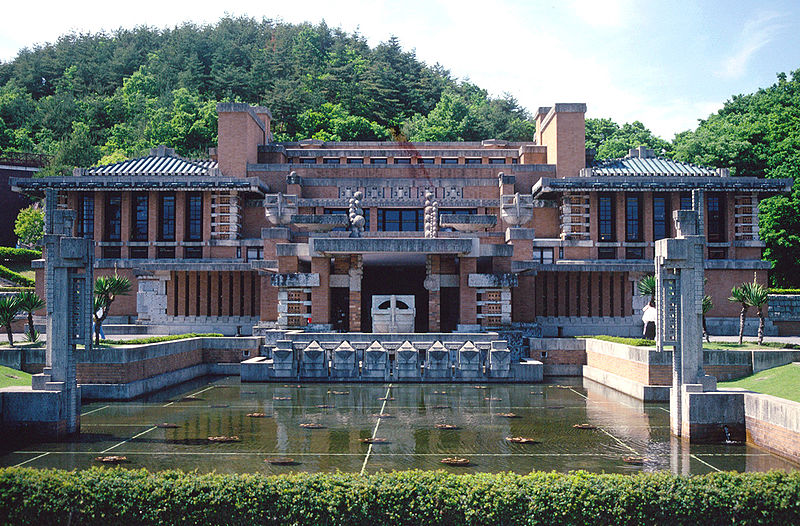 It’s my resolution to finish more projects with as much speed as efficacious.  Otherwise they’ll lose luster too quickly compared to the new.  Amelia had said she wanted to finish the project with me but had not done much through the 60% mark (preferring understandably to relax reading after the birthday party and before Erica’s concert.)  The concert then dinner ran long; feeling close to the finish line I wanted to cross it and did.  It fluttered in my head that I might want to wait for Amelia but weighed against the risk of losing pieces and/or simply not finishing, I finished it off.  Much to the delight of G & C, as we headed off to Nation’s for celebratory grilled cheeses.  Amelia came back later, annoyed.  I felt disproportionately bad that I had let my daughter down from a small exigency and apologized.  We looked for a project to do together and she wants to take a crack at the Villa Savoye, which we will.

I’m not much of  a photographer but thought building out a time-lapse photograph of the building would be cool to experiment with so here goes.  I’ll try a more disciplined approach the next LEGO Architecture go ’round.

This site uses Akismet to reduce spam. Learn how your comment data is processed.